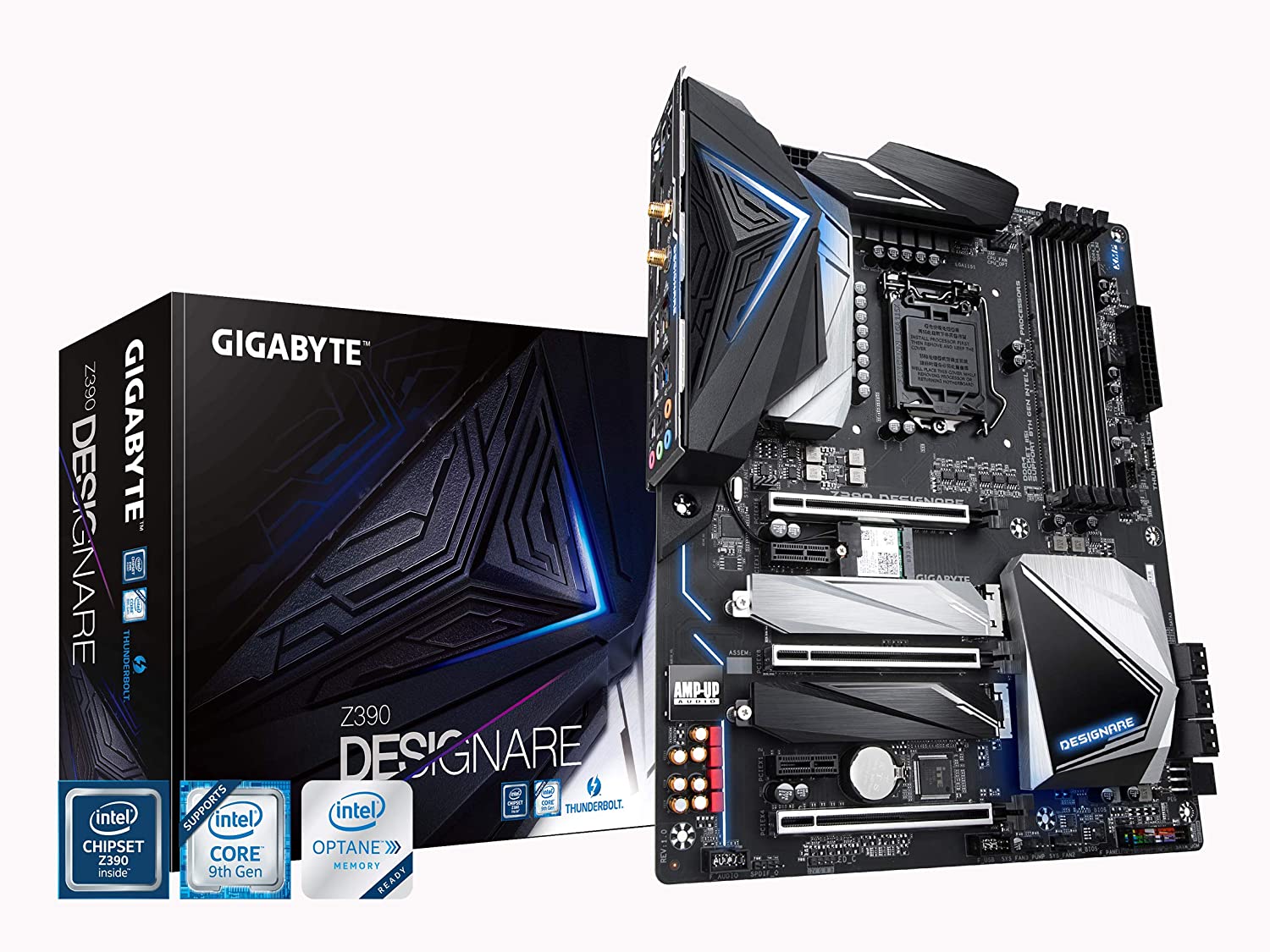 If you’re looking for the best Z390 Motherboard For Hackintosh then you came to the right place, after you are done reading this guide you’ll have 4 different great options that will work with Hackintosh.

The issue surrounding the installation of hackintoshes lies in finding a motherboard compatible with MacOS that isn’t too expensive or difficult to find. We’ll tell you how we did it so that you know what your options are when setting up yours!

The most sold motherboard for the Hackingtosh is no doubt the Designare and has best success at working with it, this is no doubt the best option out of all 4 and the one you should get if your budget allows it.

The Z390 AORUS PRO is also better than the Z390-A PRO or the PRIME, however, it falls short of the Designare in terms of overall compatibility but still works with the Hackingtosh.

Made to be for the modern creative with no boundaries, this new motherboard has all that you need no matter what type of creation you happen to be in the mood for.

With its support for 9th and 8th Generation Intel Core processors, Dual Channel Non-ECC Unbuffered DDR4 Memory, 12+1 Phases digital VRM solution with DrMOS, Intel Thunderbolt 3 – its USB-C that does it all; Bluetooth 5.0 and Advanced Thermal Design with Direct Touch Heat Pipe, there isn’t anything stopping those inspirations from turning into reality through this board!

The Z390 Designare is one of those products to really get excited about as it was developed with all these improvements in mind without forgetting what we mean by “fusion” when it comes to style, form, and functionality.

This product has GIGABYTE’s signature dragon logo at the front center on its shroud that’s carved into metal and wrapped in carbon fiber weave. The posts are made from stainless steel instead of plastic so they look great even when they aren’t glowing.

The MSI Z390 Pro has been used for dual boot Hackintosh setups and is a very user-friendly option for assembling a Hackintosh.

SSD drives perform well, and you can quickly get most features up and running.

You may use integrated graphics, but you’ll have trouble having unsupported graphics to function. When using non-NVIDIA graphics cards, Mojave performs best.

A few problems that users have reported (note: always search the forums to see if they have been resolved) include the inability to get normal audio to function. Standard audio works, but HDMI audio does not.

The Z390 is a motherboard that performs extremely well as a Hackintosh, and there are several guides available online to assist you in getting started.

The ASUS Z390-A PRO comes with a plethora of premium features, and wide compatibility to boot.

Whether you’re upgrading or building your first rig from scratch, this board is the perfect partner for all your needs. Turbo M2 PCIe gen3 x4 Interface ensures stable transfer rates to NVME SSD’s for improved performance over USB 3.1 gen2 controller operated by an Intel USB 3.1 gen2 controller so that users can be assured they’ll never lose their data by providing stable connectivity regardless of what hitchhiking malware resides on their local system as well as built for reliable operation across a variety of conditions including temperatures ranging from 0 ̊ C – 80 ̊ C.

Many people have had experience running macOS Mojave on this motherboard. The Sapphire Vega 64 graphics card was used, but these components can be changed if desired.

The majority of the features are functional:

The majority of functions perform normally, although there are a few quirks and objects that either do not work or do not behave normally. Among the areas of interest are:

The fact that Mojave does not help NVIDIA is a problem, but it is not the end of the world (but High Sierra does support NVIDIA).

Since Mac only accepts 15 ports, all of the ports on your motherboard would be inoperable – not a big issue.

Many people have problems having the onboard WiFi and Bluetooth to function, but this can be fixed with a PCI card.

The Gigabyte Z390 Aorus Pro Wi-Fi motherboard has arrived and is ready to power the next generation of Intel Core processors with improved performance.

With its advanced thermal architecture, this board’s heatsinks and heat stream are designed to dissipate unsightly heat to maintain core temperatures for optimal efficiency. It also features Bluetooth 5, dual-channel unbuffered DDR4 memory (up to 4400MHz), and support for up to 2 M.2 solid-state drives!

The ASUS Prime Z390-A comes with sophisticated fan power for complex system cooling. It is designed specifically for 9th and 8th generation Intel Core processors to optimize communication and speed.

In contrast to other motherboards that can overheat under stress, this motherboard has overclocking built into its heart thanks to the redesigned 5Way Optimization algorithm with new features like clever estimation and thermal telemetry.