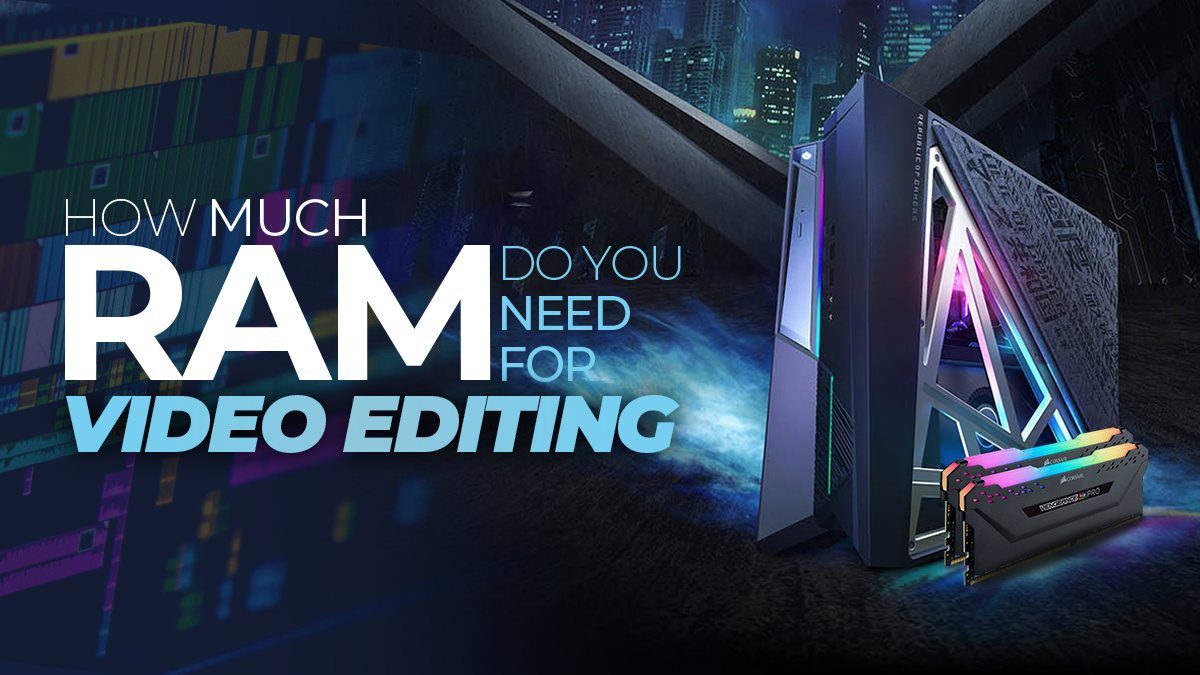 When it comes to creating videos, there are many things that can go wrong. A few of the most common problems include low-quality footage, not having enough storage space, your computer slowing down when working on a large project, and so on.

If these problems sound familiar, you may have wondered if upgrading your system’s memory will solve them or if it would make any difference at all. Unfortunately, this isn’t always the case as some tasks require more powerful hardware than others do, and the hardware at fault may not be the RAM, it can be the CPU or GPU, however, we’ll go into detail regarding how much RAM you should need for video editing.

What Is Video Editing?

Video editing refers to the process of combining multiple pieces of media together to create one cohesive piece of work. This could be done with audio alone (such as voiceover), images, text, graphics, etc., which allows us to produce an entirely new form of entertainment content. In fact, we wouldn’t even consider producing movies without using computers today.

With so many different components involved in the production of a single movie, every minute counts. To help ensure smooth transitions between shots, editors often rely heavily on their computers’ resources such as CPU speed, GPU strength, and available RAM. Without sufficient amounts of RAM installed, however, video editing becomes increasingly difficult and time-consuming.

While it’s true that higher speeds typically lead to better results, they also come at a cost of increased electricity usage. As a result, you’ll want to choose whichever machine best suits your needs while balancing its price against the amount of additional cash needed to purchase faster processors or GPUs.

In other words, each program has access to specific sections of the overall total RAM within your system. However, because RAM doesn’t last forever, unused portions must eventually be cleared out to free up room for newly acquired data.

As such, knowing exactly how much RAM you need depends largely upon whether you plan to run several programs simultaneously. If you only intend to open one app per session, then extra RAM won’t add anything significant to your experience. On the other hand, if you frequently launch multiple apps from either Windows 7 or macOS 10.13 High Sierra, then adding some extra RAM would allow you to open up multiple applications before needing to allocate more space.

The same principle applies to video editing. Programs such as Adobe Premiere Pro generally take advantage of every bit of available RAM during playback to improve efficiency. With high demand placed on both CPUs and GPUs, however, loading complex projects requires substantially more RAM.

To give you an idea, Adobe Premiere Pro uses approximately 4-8GB of RAM when rendering footage in real-time. While this number fluctuates depending on numerous factors including resolution, frame rate, compression settings, file size, among others, your mileage may vary.

Related:  Why does my Graphics Card keep crashing? - FIXES

Why Does My PC Run Slow When I Edit Videos?

It’s easy to assume that poor video quality is solely attributed to low resolutions, but the truth is far less cut and dry. Other possible causes include too little RAM, outdated operating systems, and poorly optimized source files, amongst others.

However, regardless of the cause, once you’ve exhausted your system’s available RAM, certain actions become significantly slower.

At this point, your system begins prioritizing older processes over newer ones, leading to sluggishness throughout the entire user interface. Even opening menus becomes cumbersome.

This happens due to two main reasons: firstly, your processor constantly switches back and forth between executing code and managing active memory.

A good way to prevent this from happening is to install a dedicated video card, especially if you plan to edit professional productions regularly.

In addition, you’ll want to keep your current OS updated.

Finally, it’s important to note that the above scenario occurs when your computer lacks adequate memory.

Additionally, if you find yourself unable to complete simple chores after upgrading your RAM, check out our list of easy ways to fix RAM errors. Lastly, if you suspect that your problem persists despite following the steps mentioned earlier, try updating your drivers to see if it improves matters.

Related:  How Much Cpu Usage Is Too Much - Answers & FAQ

Aside from heavy workloads, RAM also plays a role in how quickly your system responds to input commands. Thus, if you’re trying to perform intensive tasks on a system with limited RAM, it’s likely that your response times will suffer. You may notice this, particularly when interacting with objects on-screen via keyboard shortcuts.
Although this issue can sometimes be mitigated through trial and error, there’s no guarantee that you’ll get used to it. Furthermore, if you plan to continue using your current setup in the future, you may end up regretting not making the upgrade sooner.
Once again, dedicated cards offer a convenient solution to this problem, allowing users to enjoy optimal performance without sacrificing valuable desk space. Fortunately, manufacturers tend to prioritize aesthetics over practicality nowadays, meaning that you shouldn’t have trouble finding something suitable.
We hope you enjoyed learning about why RAM affects video editing performance, along with tips on improving your productivity. Please feel free to leave questions below!