[ANSWERED] Do you need two monitors to stream? Streamers Guide 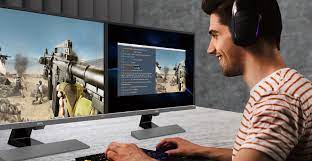 The world of streaming is a massive one, and it can be quite difficult to know where to start. There are so many platforms out there for you to use; from YouTube to Twitch, as well as many others in between. One question that often crops up is whether or not you need to have two monitors when streaming your games online, with some people arguing that this will help them perform better while gaming or allow them to multitask while streaming, while others stating that they don’t see the point of investing in an extra monitor. In this article we’ll discuss the pros and cons of each side’s arguments so you can make your own decision about whether or not it’s worth getting a second display!

See also  Do motherboard screws come with the case? | Answering most common questions!

Streaming is a type of broadcasting where video content and audio are distributed live over the internet. For this article, we’ll be focusing on streaming games online for other people to watch as they play them! Streaming lets you interact with your audience in real time while also giving viewers an insight into how you do things differently from what they might usually do themselves. It’s a fantastic way of showing off certain skills or just providing entertainment to others who may not have enough time to sit down and play all day!

There are many different platforms available for gamers looking to stream their own gameplay: Twitch, YouTube Gaming, Mixer, Mogul Media Club; Facebook Live – it can be difficult to know which one will suit your needs best when you’re just starting out.

Do you need two monitors to stream?

No, but it does make things easier for you and improves overall stream quality.

You can stream with only one monitor, just boot up your OBS or whatever program you use to stream with and just play the game. However you won’t be able to interact with your viewers as easily since your only monitor will be focused on the game.

What do streamers use a second monitor for?

Having two monitors has many benefits such as:

– Your chat will be on one monitor and you can still see what’s happening in the game.

– If someone messages you, a notification pops up to let you know so that it doesn’t distract from playing the game.

If you have the possibility to, you really should invest into a second monitor if you want to stream professionally, or even if are a beginner that wants to stream.

Some of the more advanced streaming programs like OBS or Xsplit allow you to add some elements on your second monitor such as showing chat, having widgets right next to your game window and so on. This can make it easier for viewers watching you play games live!

When using two monitors, one is used for displaying the content (usually video) while the other displays any text-based information such as chats and notifications from social media sites. You also have an increase in productivity when multitasking between windows since each screen has its own set of tabs open with different tasks being displayed at once. The only drawback about this setup is that most people will need enough space on their desk to fit 2 monitors and quite a powerful GPU since you will now have 2 monitors connected to a single GPU while streaming & while playing games, it’s a very CPU & GPU intensive task. If you don’t have a super powerful GPU/CPU then staying with a single monitor might be a wise choice.

– Do not use two monitors when streaming or playing games if your GPU/CPU can’t handle it, it’s a very CPU & GPU intensive task.

See also  [ANSWERED] Do I Need To Install Motherboard Drivers?

If you’re using one monitor for game and stream, it makes your setup more expensive because you’ll need a powerful GPU to power both screens at once which will lead to lower FPS rates on the screen that needs more performance.

-If you can afford it though and your PC can handle it, consider a second monitor, it improves your quality of life and improves the overall quality of your stream.

Let us know if you have anymore questions, just write a comment below and we will do our best to answer them 🙂