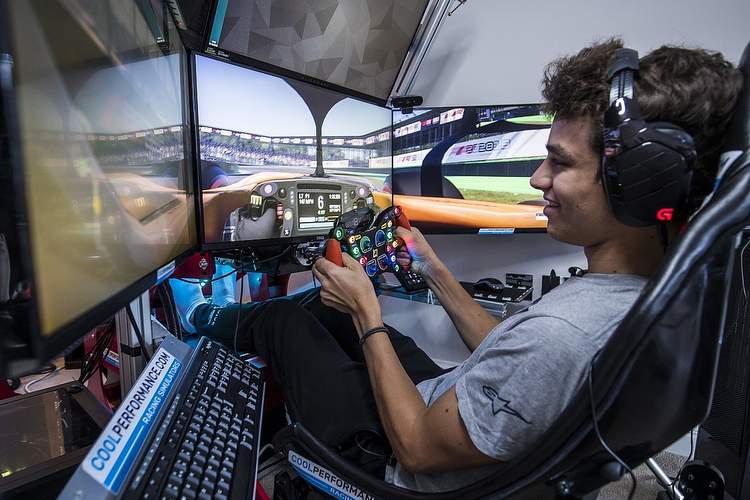 What would it be like to drive a Formula One car? I bet it feels amazing. By getting a setup like Lando Norris, you can get close to having the same feeling. A proper setup will feel as immersive as possible while also providing you with as much stability & competitive performance as you desire.

Norris has admitted to using Racing Simulators for training before his real life races, especially iRacing, and he has contributed a lot to the growth of the community around sim racing games.

He shares his experiences on Twitch, and unlike most other drivers these days he enjoys exchanging opinions with everyone online. He is one of the first pioneers in this new behavior we have seen from him recently, as well as an example to anyone looking for a way to handle their social media account. Not only does it make it more enjoyable for their fans to connect to with him but also shows how he really is as a person in the comfort of his home while playing games, a fun, and friendly person.

He uses a cockpit/bundle named CoolPerformance Formula Simulator which is custom-designed, as such, you can’t really get most of the individual components, and even if you could, the whole bundle is worth roughly 30000$. You have to contact the brand and ask for a custom cockpit for yourself, you can do so here: https://coolperformance.com/product

Since not everyone can afford 30k, we decided to tell you a very similar setup to what he’s using with products being sold on the market.

Before proceeding, we also recommend you to have a look at the Best VR Headsets For iRacing if you want maximum immersion while playing.

This setup will provide you with a similar feeling to running the 30k custom-designed bundle that he is using. It will still be extremely immersive and they’re all top-notch quality products.

If you would like to save some money you can reduce the 4k triple monitor to 1440p or 1080p but the image quality & color won’t be nearly as good.

He usually plays iRacing and thanks to him many other professional F1 drivers are starting to play it too during their free time.

Is iRacing worth playing?

If you’re interested in racing simulators, then iRacing is worth playing! It’s the most competitive of all simulation games and it has a very large following.

You can find plenty of people to race against (though many are quite experienced) which makes for an interesting variety of competition. The game also provides excellent graphics and force feedback with its official wheel setup.

There are some downsides though; there isn’t much content if compared to other driving sims like Dirt Rally or Project CARS so those who enjoy roaming around in-game may want to look elsewhere.

How much does a proper setup cost?

Is getting a good sim racing setup worth the price?

There are many options.

The price range is very wide so there’s something for everyone, but most people end up going with a wheel and pedal setup or an expensive chair/cockpit combo like the PlaySeat Evolution. It all depends on what you want to do; if you just want a basic device (like the Logitech G27) then it will be cheaper than other devices that have more features such as force feedback capabilities and being able to mount your steering wheel in different positions. If money isn’t an issue, however, then get whatever suits your needs best!

His Networth is roughly 1M Dollars according to public knowledge, it may be a bit higher by the time you’re reading this.

How much does his sim bundle cost?

He used arguably the best custom-made bundle in the world for sim racing, to purchase it you gotta contact the manufacturer at: