How to Get Better at Knifing in Cold War – Pro Tips 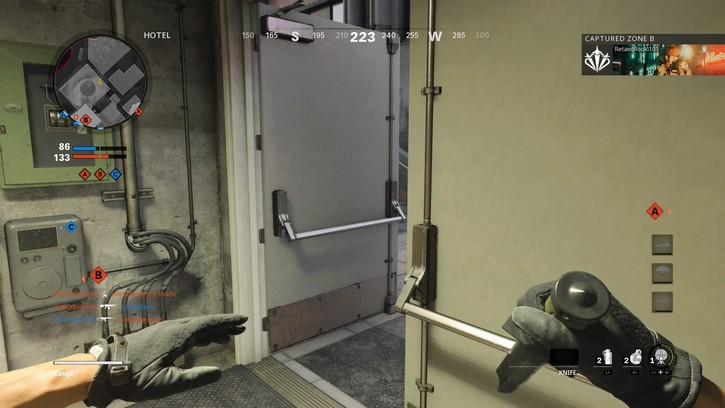 Knifing in Cold War has many benefits. Apart from maximizing your early points, you can get a satisfying number of kills with a knife. Unlike guns and explosives that are loud, you can flank an enemy and kill them with a knife. None of the other teammates will sense danger because you just performed a silent kill.

But to be perfect in knifing, there are a few tips you need to know. First, you must optimize your controller to suit your playstyle. That way, you can assign a button to knife an enemy. To learn more about improving this skill, we suggest you check these Cold War aimbot hacks.

Suppose you want to get better at knifing in Cold War; set up a command button for a fast throw action. The higher-end side button on your mouse is a recommendable setting for your command button. However, you can use the G-key (standard key) for practice. It’s viable and easy to reach.

Some players use the lower-end side button. So, you can experiment with the buttons until you find the one you can reach more comfortably. You don’t want to lock on the target and throw your knife aimlessly because your mouse moved uncontrollably.

Just like using a short-range rifle to fire at a target 100 meters away (definitely, you won’t get a kill), throwing your knife at a target at far distances won’t guarantee a kill. It is recommendable to throw knives when the target is in close range.

For instance, you can knife an enemy in compacted spaces like narrow corridors or small rooms. However, for a sure kill, get as close as possible to your target, put him in the crosshairs, and knife them to death.

When knifing in Cold War, look out for enemies with riot shields. Once spotted, try your best possible to flank and knife. If you throw your knife at the enemy directly, it’ll stick to the enemy’s riot shield. You’ll need to approach the enemy very closely to retrieve your knife.

Sometimes, it can be a dangerous attempt. So, you must be tactical. Instead of getting your knife stuck, you should flank the enemy and knife from behind.

Although the knife in Cold War is retrievable, you must get close to where you threw it. It can then automatically return to your inventory. So monitor where the knife lands to avoid losing it. You can’t be moving around the area with faith, hoping to find it by luck; it can be risky.

So, when you successfully knifed an enemy to death, or you missed it, you should monitor your lethal weapon to retrieve it quickly. Luckily, if the enemy dies, you can retrieve your knife by moving close to him.

If you put a target in the crosshairs, you can throw your knife, and it’ll trace it to its final location. So, once you lock on your target, use your crosshair to trace it until it’s knifed. This trick works to knife an enemy running to take cover.

Since there’s a tiny gap between drawing and throwing your knife, you can make the most of that time gap to make the kill.

You need to stay alive to get better at knifing in Cold War. It’s the most important tip you need to keep in mind. Enemies can fire, throw knives, and detonate explosives as well. So, as you move around and engage in knife fights, it’s vital to take cover occasionally.

Furthermore, you should move from cover to cover whenever stuck in a mess. You don’t want to attempt a knife throw and get knifed from the unknown. So, always take cover behind objects whenever possible.

There are no fixed tips to improve in Call of Duty games, especially knifing in Cold War. You must adopt useful and effective tips and watch the magical gameplay improvement. To get better at Knifing, tag along with your target using a crosshair. Your knife will follow the target until its last bus stop.

Furthermore, always retrieve your knife, so you don’t run out when you need it the most. No matter how you decide to play in Cold War, remember always to take cover. You don’t want to die carelessly.